What Will Health Care In Indiana Look Like In The Future?

What will health care in Indiana look like in a few years? Currently, there are many affordable medical policies available. Comprehensive, High-Deductible, HSA, student, and temporary plans are offered by most carriers. But will the current situation change if national health care reform (Obamacare) survives major opposition, and is in full swing in 2014?  That’s a scary thought. Or is it? Will rates increase or decrease? Will you be able to keep your doctors?

Currently, Indiana residents can select any level of coverage they want. If you need a lower premium, you can pick a plan with a high deductible. If you have small children whose second home is the physician’s office, you can buy a policy with low copays and low deductibles. And typically, there is no limit on the number of visits to your primary-care physician (pcp) or specialist. You can choose a plan with unlimited benefits, or without office visit or specialist benefits. Customizing deductibles and benefits often allows you to save thousands of dollars in premiums.

Unless you have major health issues, you have complete control over what type of medical coverage you buy and which company you buy it from. Yes…it is true that Indiana has less carriers offering policies than several neighboring states, but there are still plenty of choices. Between Anthem, UnitedHealhcare and Assurant, there are more than 500 policy options. That’s a lot! Several additional carriers also offer affordable options. Many smaller companies have niche policies that can supplement your existing coverage. 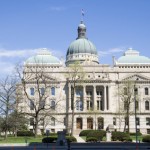 If you have a major illness, there are state-sponsored options that will assist you. The Indiana Risk Pool offers health care coverage to individuals and families that may not be able to qualify (medically) for coverage. The Indiana Primary Health Care Association can also offer some assistance. There are also a few other options, including controversial “discount policies.” Those are contracts that have many exclusions and disclaimers mixed in with a few benefits.

But in 2014, the situation may change. If you have  medical problems, and can’t afford insurance, you’re probably going to be a major benefactor of national reform. Your premiums may reduce, (with help from a federal subsidy) and you will receive excellent coverage. Of course, if several analyst’s projections are correct, your coverage won’t be so good, with long waits for service a definite possibility. You should still be able to buy a plan through a broker, although it’s not quite etched in stone. The advantages of a broker’s services are further explained in this post.

However, if you have no medical conditions and your family income is near or above $95,000, your rate will probably increase. A lot. It might even soar! How much? It’s hard to say since folks in Congress can’t seem to agree on how much Obamacare will cost and who has to pay for it. Rates could double. Or maybe the increase will be closer to 20%. Nobody seems to know. But every time a cost analysis is done, the numbers seem to increase. And there is no question that 5-10 years from now, costs will be much higher. Future reform changes are very uncertain, and the effectiveness of the newly-created Marketplace is unknown. A new Congress and/or a new President could create new challenges and complications.

Of course…what happens if either the Supreme Court rules unfavorably on Indiana health care reform or a new administration in 2012 repeals Obamacare? A lot would depend on how that new administration acts,  and what they intend to do about rising costs in Indiana. There are actually many positive changes that the “Affordable Health Care Act” has introduced (such as removing lifetime caps) that should be protected. Protecting the tax-deductibility of HSA deposits is also critical.

My solution is quite simple. Let’s keep the mandatory preventive benefits on most policies. That has worked well. Let’s also keep the State “Risk Pools” for folks that are uninsurable. But let’s ratchet up the usage and implementation of Health Savings Accounts.  HSA’s are becoming more popular each year and it would be a shame if some day Congress took them away from us. In fact, to reduce costs, these types of policies should always be considered as a primary plan, especially if the major medical deductible is rarely met. Employers should be provided incentives to make HSA deposits for employees.

Add some tax credits and allow tax-free interest accumulation on the savings portion. Reward anyone who utilizes their qualified preventive benefits on a regular basis, completes a smoking-cessation or takes a weight-reduction course. Emphasize usage of generic drugs and eliminate all ER visits unless medically necessary.  Encourage MRIs, PET scans and other diagnostic tests to be “shopped” for the best price before scheduling the work to be completed. Steps like these will reduce everyone’s rate and put more money in the consumer’s pocket.

My idea will reduce Indiana health insurance premiums by hundreds of thousands of dollars. But what do I know? I only have been in the business for 31 years!

It’s been more than two years since I originally wrote this article. And there have been a plethora of changes, culminating with the implementation of Open Enrollment a few months ago, which is a key piece of the Affordable Care Act.

The future has arrived. Despite delays, confusion and security issues, Obamacare Indiana plans are available. You can compare rates through our website, and also enroll for coverage. The Exchange plans don’t require you to qualify medically, so don’t worry about any pre-existing conditions. Also, if you’re contemplating a procedure or surgery, that’s OK too. It should be covered.
Although a Supreme Court ruling is expected later this month that could drastically alter Obamacare, the legislation is still alive and kicking! Federal subsidies save many household thousands of dollars on their medical plan costs, and depending on the SP ruling, these subsidies may be in jeopardy.
Obamacare is still alive, although struggling. Major companies, such as Aetna, UnitedHealthcare, and Humana, are exiting the Marketplace in many states. The upcoming Presidential election in November may lead to several changes. A Clinton win will probably result in some tweaks, including creating a stripped-down inexpensive Bronze-tier plan option. A Trump win may result in more significant changes.

Anthem and MDwise  are exiting the 2018 individual Indiana health insurance marketplace. Political and financial uncertainty in the Exchanges led to the decision. Senior, Medicare, Group, and Medicaid plans are not impacted.</div